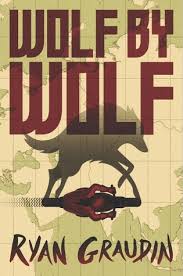 I had wanted to read Wolf by Wolf for a while, but when I found out the author was coming to Canada last year, it finally spurred me to pick it up in order to get it signed. After finally finishing it, I am so glad I did just that.

Wolf by Wolf is an extremely fast-paced novel. The pages fly by in such a way that one minute you’re on chapter 3, and the next thing you know you’re suddenly on chapter 18 and it has been an hour. I can’t remember the last time a book flew by like that for me.

While I was reading Wolf by Wolf, I could not shake the feeling that something was not right with the writing. There were haphazard flowery simile and brackets everywhere. Then I thought about it for a few minutes and it hit me. This book feels like it was genuinely written by a teenager. That may seem like a bad thing, but I find it to be incredibly interesting and unique. I love beautiful writing as much as the next person, but I find most first person YA books are written in such a way that it is clearly not a teenager telling the story, which ends up breaking the magic that truly sucks you into the story.

Yael is a hard character to attach to on an emotional level. I get why, and frankly she should be hard to connect to, but half the reading experience for me is having an emotional connection to the characters. In my mind I knew she was not going to die, and I knew she would not fail, so I didn’t need to be concerned for her safety.

Overall, Wolf by Wolf was a face-paced and unique read, earning it 4 stars out of 5.