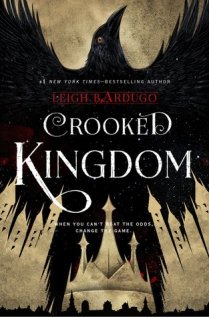 This duology is absolutely amazing, so much so that it has earned the number two spot on my shelf (I organize by preference if you didn’t know). I don’t feel like going into this fully (especially since all of my reviews go on Goodreads and the Chapters Indigo (Canadian bookstore) website), but if you haven’t read some of my more recent posts, I have been dealing with some stuff for a while and have only recently started to deal with it, with said “thing” hitting me the hardest I think it has ever hit me from the end January to the middle of February. So what does this to do with Crooked Kingdom? Well, I read both Six of Crows and Crooked Kingdom during that period, which makes me both sad and incredibly grateful. It makes me sad that I will never be able to read these books for the first time in a “good” mental state, yet grateful because these books helped me through that period so much. I think this a good reminder that you don’t always have to relate to a novel for it to help you; sometimes you just need a perfectly crafted story with some phenomenally flawed characters.

The story simply sucks you in and doesn’t let you go until you have read every single page, and even then, this one of those books that is completely unforgettable. For that reason, it was the perfect read to help me forget and escape. My brain wasn’t hell for a few minutes; instead it was too focused on praying for nothing to happen to some of the best characters I have ever read.

Speaking of the characters, I am incredibly grateful that some of the characters don’t end up “getting better” by the end of the book, because some things can’t be fixed in a few hundred pages, and as upset as I am that two of my favorite characters didn’t end the book in a relationship, I think they have to slay their demons first, and I can appreciate that that might take some time. It didn’t help that one of them did the sweetest thing for the other in the second last chapter, though.

There is also a soul shattering moment where my feelings on the event were perfectly summarized by a character, but I can’t say what it is because of spoilers. Let’s just say that even guessing which relationship would be destroyed didn’t stop the river of tears (for those who have read Crooked Kingdom, I thought it would happen to the other half of said relationship).

Overall, Crooked Kingdom is unforgettable, earning it 5 out of 5 stars. I recommend it to everyone on the planet, even if they think they won’t like it.