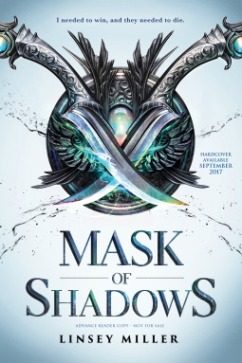 *Thank you to Netgalley and the publisher (Sourcebooks Fire) for providing a copy in exchange for an honest review. My opinions are my own, and are honest as always.

Mask of Shadows is the first ARC I have been approved for. Receiving the email saying I had been approved to read it through Netgalley kept a smile on my face for the rest of the week. I obviously really wanted to love Mask of Shadows, but I had too many issues with it to give it a high rating.

Let’s start with the positives. It was really interesting seeing a gender fluid main character. I don’t know that much about being gender fluid, and I cannot say anything about the accuracy of the representation, but it was interesting to see it represented in YA. I was a little confused when I didn’t quite catch how Sal was dressed (they dress how they wish to be addressed), but you quickly learn Sal’s gender doesn’t matter from a plot standpoint.

On a more negative note, I spent the novel in a state of confusion. Maybe I accidently skipped over some words, but I would be reading, and there would be something that didn’t quite add up. People I thought were in the room, weren’t there in the next paragraph, the characters were in a completely different room than I thought they were, etc. Again, this might have been my fault entirely, but what wasn’t potentially my fault were the “info dumps” that were throughout the novel. There would be long stretches of time where Sal would be explaining multiple years’ worth of history, and then the plot would continue as if an entire war hadn’t just been explained.

The characters were also lacking in the development department. This happens all too often with revenge driven characters. The author knows that the characters actions should be driven by revenge, but they forget that the character needs to have other characteristics. If you asked me to describe Sal, the only thing I would be able to say about them is that they want revenge for the destruction of their country.

The comparison of Mask of Shadows to Leigh Bardugo and Sarah J Maas are half right in my opinion. While it frustrates me to no end that every thief book is compared to Six of Crows, I think the comparison to Throne of Glass is pretty dead on. Let me preface this by saying that I have only given 2 Sarah J Maas books 5 stars (Queen of Shadows and A Court of Mist and Furry), but I have read all of her released novels. As a Sarah J Maas reader, here are some of the reasons Mask of Shadows is similar to Throne of Glass:

I’m sure there are more similarities I can’t think of at the moment, but it’s pretty much your typical YA fantasy book.

Overall, the only new thing Mask of Shadows brings to the table is a gender fluid main character, earning it 2 stars out of 5.