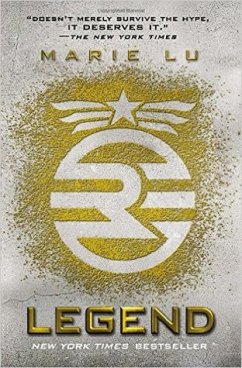 I’ve never been a fan of dystopian books. In fact, I pretended to like Divergent and The Hunger Games so I could actually have a conversation with another human because I had no friends back when they were popular. I wasn’t even going to ever read Legend, but Marie Lu came to Canada last year, and I thought I might as well give it a chance if I was going to get it signed.

If you like dystopian books, you’ve probably already read Legend under another tittle by another author. If you don’t like dystopian books, you should also skip Legend, because it has all the dystopian clichés you could want. This includes, but is not limited to: the corrupt government, the government leading to the death of a loved one of the main character, main character(s) are super different from everyone else, and the US is the only country that could be involved in a dystopian government conspiracy. There’s nothing new here.

It is also terribly predictable. It took me two chapters to guess all of the “ground-breaking” truths Metias leaves behind for June, and the whole thing with Day is painfully obvious. There is nothing to keep you reading when you already know what’s going to happen.

The most interesting thing for me was contemplating whether or not Marie Lu called it the Republic because according to my history teacher the US is the only functioning Republic.

Overall, Legend is not worth a read, but is not “bad” enough not to not finish, earning it 3 stars out of 5. I do however recommend Marie Lu’s Young Elites trilogy. If you like anti-heroes, you’ll enjoy The Young Elites.