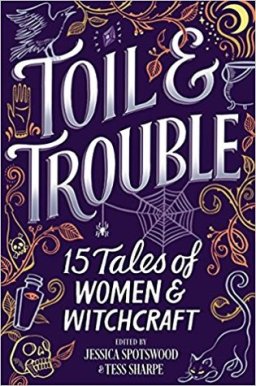 I never have much luck with anthologies, but I love reading them anyway. They’re a great way to find new authors and read different author’s takes on similar things. I read Toil & Trouble in September, and as I like to review each story as I read, this review has basically been written since then. The rating above is the average rating between all the stories. But without further ado, let’s get on with my thoughts.

I wasn’t really into this at first, but it was heartbreaking and sweet at the same time. I think the way Luna’s magic worked was really interesting, and though I understand nothing about astrology, I really liked seeing her magic be star based.

This tried. It really did. But it also really wasn’t good. There wasn’t much of a story to it, what little there was of a story was uninteresting, the writing was trying really hard to emulate the style of the time the story is set, but it doesn’t do a very good job, and the format of just having large paragraphs of text between trial dialogue did not work.

The Heart in Her Hands by Tess Sharpe

I wanted to like this more because it feels right up my alley, but I just didn’t. There’s nothing “wrong” with it by any means. It just didn’t hit me the way I wanted it to.

Death in the Sawtooths by Lindsay Smith

I’m not sure I understand the magic, or what made this a story that someone thought needed to be told. Even when something happened it felt like nothing was happening. Maybe I just don’t get along with Lindsay Smith’s writing, but this one gets a no from me.

The Truth About Queenie by Brandy Colbert

Not enough witches. It actually felt like a severely shortened contemporary book with a slight magical element rather than a short story. It wasn’t what I was looking for, but it wasn’t bad.

The Moonapple Menagerie by Shveta Thakrar

I didn’t like this one so much that I bumped up my rating for 2 of the previous stories. At first I was going to recommend it to younger teen readers, but then it started preaching the sort of stuff my professors would say, which was very odd. It does have a sort of “friendship is the most magical thing out there” sort of message you find in TV directed at young kids, but it’s inconsistent.

The writing tries really hard to be beautiful and flowery, but it just felt forced and confusing. Like I still don’t understand what the title refers to.

Speaking of getting confused, partway through the magic started to feel like a metaphor for the magical qualities of art, but then it seemed like there was actually magic being used. I still don’t understand why they’re sometimes animals, I don’t understand the bone place (or whatever it was called), and I’m not even sure I know what happened.

The Legend of Stone Mary by Robin Talley

I really didn’t like the writing style of this one. It’s very stream of consciousness, which doesn’t tend to agree with me. It also kept going off on weird tangents that didn’t need to be there.

This is also another one where it wasn’t as witchy as I wanted it to be. Instead it was about a girl over-explaining things, and then suddenly there’s a witch hunter and she know how to stop the curse the end.

The One Who Stayed by Nova Ren Suma

Stopping reading this felt like breaking magic. This less than 20 page story is so raw and heartbreaking and beautiful and perfect. One of the best of the collection.

Divine are the Stars by Zoraida Córdova,  Daughters of Baba Yaga by Brenna Yovanoff, The Well Witch by Kate Hart, Beware of Girls With Crooked Mouths by Jessica Spotswood

Eh. I didn’t really care about these.

I really liked this one. It was really sweet.

The Gherin Girls by Emery Lord

Turns out I forgot to write out my thoughts on this one. It was by far the longest, with multiple perspectives. I don’t know. It briefly hit me a couple of times, but not enough for it to get a better rating than 3 stars. I did read it while very tired though, so that might have had an effect.

Why They Watch Us Burn by Elizabeth May

I feel like I would have really liked this one had I not been exhausted while reading. It’s certainly a very powerful story that I wish I had connected to a little more. It was a really good choice for the last story of the anthology.